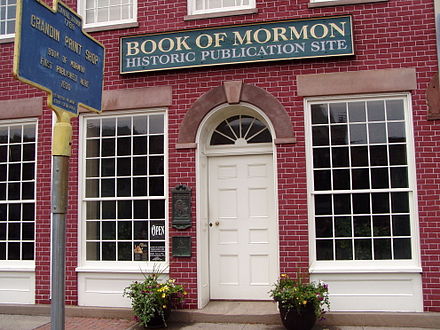 One of the most popular historic sites that every LDS should definitely visit is none other than Book of Mormon Historic Public Site. Located in Palmyra, Wayne County, NY, USA, this historic site includes E.B. Grandin Building. This is the very place where Egbert B. Grandin printed then sold the first ever copies of Book of Mormon in years 1829 to 1830. Due to the historical significance of the building to Mormonism, the LDS Church bought this in 1978. During the mid-1990s, the Grandin building was restored by the LDS Church. It was also remodeled and neighboring structures were added to create the visitor’s center.

Joseph Smith, Latter Day Saint movement’s founder, spent his boyhood in the Smith Family Farm. The farm can be found in the townships of Manchester, Ontario County and Palmyra, Wayne County, NY. The Smith Family Farm is where you will find the Sacred Grove, the restored frame house of the Smiths together with the reconstructed log house. The site of the farm’s ownership was passed onto LDS Church in 1915 and during the 1990s, the frame house was restored by the Church, the log house was reconstructed and the welcome center was built. Church missionaries also offer tours for free.

The Kirtland Temple is nestled on a steep clip in the northeastern Ohio, approximately 25 miles on the east of Cleveland and overlooks the scenic Chagrin Valley. Community of Christ or formerly Reorganized Church of Jesus Christ of Latter Day Saints owns and operates the Kirtland Temple. Tours are available for free for everyone no matter what their faiths might be. The LDS Church has also restored some of the buildings and sites in the Historic Kirtland that bring to life the spirit and story of the original Kirtland Saints.

For almost one year from September 1831 to September 1832, The Church of Jesus Christ of Latter-Day Saints used the John Johnson Farm as its headquarters. It served as the venue for many important conferences. In the home’s upper room, it received probably 16 revelations in Doctrine and Covenants. Some of these include the Preface, Doctrine and Covenants section 1, as well as section 76, the vision of three degrees of glory.

During his stay here, the Prophet Joseph continued working on the bible’s translation. John Johnson Farm was also the place where Sidney Rigdon and the Prophet were dragged away from the home, tarred then feathered on the 24th of March 1832.

The Joseph Smith Birthplace Memorial is the eye-catching granite obelisk perching on the hill in White River Valley next to South Royalton and Sharon, Vermont. This serves as the mark on the very spot of the birth of Joseph Smith, Jr. on December 23, 1805. The Church of Jesus Christ of Latter-day Saints erected the monument that recognizes Smith to be its founding prophet and first president.

The Church of Jesus Christ of Latter-day Saints owns and operates the place as a tourist attraction. This monument has a height of 50 feet and weight of around 100 tons. The obelisk has a shaft weighing 40 tons with a length of 38 ½, one for each year in the life of Smith.

The gold-spired Washington D.C. Temple Visitors’ Center stands on the sprawling grounds aroud 10 miles on the north of United States Capitol. The landmark is popular for being a beautiful soaring edifice that is further enhanced by the reflection of the pond located close to the visitor’s center as well as the spouting water feature at the entrance of the temple. Admission to the center is free and during Christmastime, the Festival of Lights set the grounds aglow with the international nativity sets, a live nativity scene, and nightly concerts.

Church Administration Building is the administrative office building of the LDS Church. This serves as the home to the offices of the Quorum of the Twelve Apostles and First Presidency. This is also where you can find offices for the rest of the general authorities as well as their respective personal staff. The building was established in 1917 and only allows entry to the officials of the church and their guests. The Church Administration Building has also been used for the meetings between several community and political leaders and church leaders. It is also a historic building for LDS Church members.

Fully constructed in 1972, the Church Office Building serves as the home to most of the administrative offices wherein the inner workings of LDS Church take place. The production of magazines related to the Church, translation of the materials of the Church in various languages, and regulations of the missionary efforts are only among the work happening inside this building. The center tower of the building has 28 floors and two wings that both have four floors. The public can take advantage of the free tours that include views from the observation decks on the 26th floor.

Originally established as the Utah Hotel in 1911, the Joseph Smith Memorial Building served as the outstanding lodging facility for about 76 years as it welcomed travelers from different corners of the globe to Salt Lake City. Following the careful remodeling and renovation,  the building was opened once again in 1993 and this time, its purpose was different as it became the Joseph Smith Memorial Building. Visitors explore the building in the hopes of travelling back in time, enjoying fine dining, learning more about the LDS Church, and attending banquet and business functions.

Salt Lake Temple is the global icon of the LDS Church or more commonly called the Mormon Church. This massive six-spire edifice made from granite was erected in neo-gothic style for a span of 40 years from 1853 to 1893. The pioneers who decided to settle in the valley chose to sacrifice both material goods and time to build the temple that serves as the testament of their devotion and faith. For the Mormons, the temple is the place that they can go to be closer to their God.